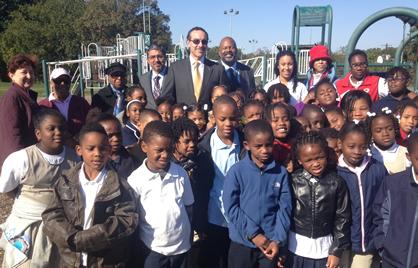 (WASHINGTON, D.C.) – Mayor Vincent C. Gray, D.C. Department of Parks and Recreation (DPR) Director Jesús Aguirre and Department of General Services (DGS) Director Brian Hanlon today announced that the District government would be undertaking the largest playground renovation project in its history. The announcement was made at Benning Park Recreation Center, one of the sites scheduled to be renovated under the expanded and accelerated Playground Improvement Project.

“Improving every resident’s quality of life is one of the main goals of my One City Action Plan, and every child in the District should have a safe and inviting place to play,” said Mayor Gray. “Renovating these playgrounds is an investment in the well-being of our children that will pay dividends for years to come.”

As part of his Playground Improvement Project, Mayor Gray tasked DPR with identifying the playgrounds across the city most in need of renovations. Initially this project was to be a multi-year endeavor as the District worked to improve all of the playgrounds in DPR’s inventory. However, Mayor Gray prioritized this initiative and worked with his budget team to identify additional end-of-year capital funds to both add additional playgrounds to the project and accelerate the pace of renovations. As a result, a total of 32 playgrounds will now be renovated in Fiscal Year 2013.

DPR and DGS conducted an analysis to determine which playgrounds were most in need of renovation and to estimate the number that could be renovated with the new funding.

Mayor Gray announced today that the following playgrounds were identified though this analysis and will be renovated through this initiative are:
Ward 1
• Harrison Playground, 1330 V Street NW
• Banneker Playground, 2500 Georgia Avenue NW

In addition, Mayor Gray’s Fiscal Year 2012 and 2013 budgets include capital funding for the renovation of the following eight playgrounds, all of which are already either in the design or construction phase:

DPR currently operates 78 playgrounds. In recent months several of them have been renovated, including playgrounds in Shaw, Columbia Heights, Bloomingdale, Shepherd Park and Chevy Chase.

“DPR is pleased that the District is supporting the renovations of playgrounds across the city,” DPR Director Aguirre said. “Play is a fundamental aspect of growth and development for children and youth, and a positive exercise experience leads to avoidance of weight gain, higher self-esteem and reduction of risk factors for disease.”

Renovations on the initial list of playgrounds are expected to start this fall, with completions during 2013.