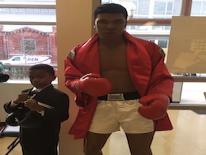 The annual Blacks in Wax performances are a collaboration by the DC Department of Parks and Recreation (DPR), Recreation Wish List Committee (RWLC) founded by Ms. Cora Masters Barry, along with the Southeast Tennis and Learning Center (SETLC) tennis scholars. The event celebrates the rich history and culture of over 60 prolific, iconic American heroes from the worlds of sports, entertainment, history, politics, and literature.

What started as an alternative method for educating youth about African-American history has become one of the most successful DPR programs. Each vignette is an inspiring portrayal of historical, familiar and influential people. SETLC scholars portray characters from abolitionist and humanitarian Harriet Tubman to the King of Pop Michael Jackson.

Other famous portrayals include Janelle Monae, Colin Kaepernick, Common, New Edition and more. The Blacks in Wax production educates and entertains all ages through the arts. Combining drama, music, dance, and theater, the SETLC youth bring African-American and world history to life for school groups, family and friends, and theater patrons.

This year’s Blacks in Wax stage performance will showcase young activists who have made an impact in the country and the world through their public protests and involvement. From elementary school-aged children to college level emerging young adults; they have “shown up” to support civil rights initiatives, college programs, gun laws and more. Young people have followed in the footsteps of great community leaders and taken up the charge lending their voices and their lives.

Blacks in Wax will also feature a museum of African American leaders, performers, educators, scientists and others who have become heroes in this country.